Champion Power Equipment is a company that manufactures a long list of power generators and related accessories, tools, and spare parts.

Champion power generators are known as reliable and durable units that are available at acceptable prices - there are sometimes better power generators, but in most cases, such units are much more expensive.

Regardless of their size, Champion power generators are like cavalry horses - tough and reliable, and in the end, they do their job well.

But, it is vital to maintain them properly. When your new power generator arrives, be sure to read the Owner's Guide thoroughly in order to get accustomed to your new unit AND, just in case, keep the Owner's Guide close to the unit - when You are unsure about something, check the official documentation and act accordingly.

Most Champion generators come with a 3-year limited warranty, but when used and maintained properly, most units operate reliably well beyond those three years.

However, as technology goes ahead, sometimes it is good to replace the old power generator with the new one even if the old one is still working properly due to the improved fuel economy, less noise, and other new features that come with newer units.

When looking for a new power generator, consider the following:

- Noise Levels: power generators rely on internal combustion engines to convert the chemical energy of the fuel into mechanical energy (rotation) which is then converted into electricity. In order to decrease the noise, power generators have mufflers and use other measures as well to keep the noise down.

Open frame power generators are not the quietest units on the market, but they are easier to maintain, rarely have issues with cooling, and similar.

Fully enclosed power generators may be surprisingly quiet units, but such low noise levels sometimes come with the price of being somewhat heavier, more expensive, harder to access various components for maintenance, and similar.

In the end, it is not important if the power generators are fully enclosed or open frame, it's the noise levels that are often given for noise measured at 23 feet distance while the unit is running at 25% load - although this can vary ...

- Fuel Types: most portable power generators use gas (gasoline) as the prime fuel. Champion also manufactures many dual-fuel models that can run on both gas and propane. As a fuel, propane somewhat decreases power output, but it is a "greener" fuel than gas, it burns more cleanly than gas decreasing the maintenance and similar. Also, propane is easier to store for a longer period of time, unlike gas (which is also often mixed with ethanol).

So, if You have an opportunity to get a dual-fuel generator, feel free to do so - one never knows when the gas can run out, especially in emergencies!

Champion is one of only a few companies that manufactures a Tri-Fuel power generator - a power generator that can use gas, propane, and natural gas, giving the user the opportunity to run the unit with whatever fuel is available and/or cheaper. Such option can come very handy when the fuel is scarce or the unit runs often.

- Engine Start: Don't call me lazy, but an electric start is much more convenient than a manual recoil starting system - just press the button and let the unit do the rest. And if You are camping/hiking/etc. and You need to start a generator from the warm bed (RV, tent, lodge, ...), a power generator with a remote control/start can come in really handy.

Champion offers a broad range of units with manual only, manual/electric, or electric/remote engine start.

- Receptacles: the list of receptacles available on each model is another important detail to look for. The most common receptacles are:

Of course, generators come with a limited set of connection ports, so choose according to your own needs. But, if required, various adapters are available as well.

- Parallel Ready power generator allows the user to connect to the same (or at least two compatible) power generators in parallel, increasing their output power.

As said before, Parallel Connection Kits often come with receptacles that are not available on the generators they are intended for.

- Runtime of the power generator is usually given in hours that the unit can operate at a certain load (@25%, @50%, etc.), using a single full tank of fuel or standard 20 lbs propane tank.

But, these values vary, so be sure to check them before buying.

Also, most inverter generators come with the so-called "Eco Mode", allowing the engine to spin at different speeds, saving fuel and protecting the engine from excess wear.

Non-inverter generators don't have such advanced electronics and feature usually much larger THD levels, up to, sometimes even more than 20% THD, making them unsuitable for powering sensitive electronics.

- Transport Wheels: some units come with a pair or even all four transport wheels, allowing the user to pull the unit to shorter distances.

Carrying handles are often present on most models, but carrying 100 lbs or so heavy a generator requires at least two adults to, for example, put it on or off the truck.

Personally, a good power generator should have a pair of carrying handles and a pair of transport wheels, combined if possible with a collapsing handle.

Larger and much heavier units should not have some cheap plastic wheels, but real, heavy-duty, run-flat tires, lift hook, towing hook, and similar.

Champion generators are as compact as generators should be - too dense packaged mechanical and electronic parts can interfere with each other in many ways.

Also, if the power generator is too light, it is probably made using many plastic parts, which can influence its durability significantly.

If You have a reason to look for a power generator of a certain size and/or weight, You will have to check each model and write down its exact size and weight.

When looking for a new power generator, there are other features to look for too, but these are the most important ones.

The following comparison chart lists some of the most popular Champion power generators, with their most important features and specifications:

Note: Amazon affiliate links (the 'Model' column) open in the new windows, feel free to check them for the most up-to-date offers and prices. Also, we have really tried to verify every single bit of information in this chart and article (and in the end - our website), but there are sometimes certain discrepancies found even in data from the official website.

Of course, when looking for a new power generator, always consider your own personal needs and requirements.

Champion 100263 power generator is Parallel Ready, with several Parallel Ready Kits being offered, each one with different output ports, allowing the user to pick the right one according to the user's needs and requirements.

These parallel connection kits include:

Champion 100263 is an EPA-certified and CARB-compliant power generator, which comes with a 3-year limited warranty.

Champion 200988 4500-Watt Dual Fuel RV Ready Portable Inverter Generator With Electric Start is in many terms very similar to the Champion 100263 power generators, except it is somewhat larger and stronger. Still, it is a rather compact and relatively lightweight, very energy-efficient inverter, dual-fuel power generator.

Thanks to the inverter technology, variable engine speed, Economy Mode, and fully enclosed design, Champion 200988 is a relatively quiet unit with a noise level of 61 dB @23 feet (~7 m) and features THD levels of ≤3%, allowing the unit to directly power even sensitive home appliances.

Champion 200988 comes with a pair of small transport wheels, built-in handles, and with a pair of foldable handles, allowing the user to easily move the unit around. If required, two adults can even carry it to short distances, just be aware of the unit's weight.

Note: Other parallel kits are available as well, but Champion 100319 accepts a broad range of Champion generators and features a 120V 50A RV 14-50R port, which doesn't come with smaller power generators.

Champion 200988 is an EPA-certified and CARB-compliant unit, which comes with a 3-year limited warranty. 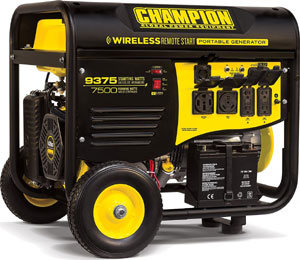 Personally, a loading ramp is highly recommended for such endeavors!

Noise level is acceptable - 74 dB from 23 (~7 m). However, when pushed to its limit, the unit can be noisy, like many similar open-frame generators in this power class.

One of the very interesting features is remote control - the unit can be started wirelessly from a distance of up to 80 feet (24.4 m). Also, it features classic recoil and electric starting systems.

Note: This unit is not the best suited for powering very sensitive electronics due to its relatively high THD (Total Harmonic Distortions), which are lower than <20%, but nonetheless too much for sensitive appliances, tools, gadgets, and other electronics.

Champion 100161 power generator is an EPA-certified and CARB-compliant unit and it comes with a 3-year limited warranty.

Champion power generators are an excellent choice for anybody requiring reliable and durable units that come at acceptable prices.

Of course, there are other brands on the market offering excellent, well-balanced units (Honda, DuroMax, WEN, Generac, Westinghouse, etc.), but Champion generators are very popular units, tried and tested by countless users in many real-life situations, with the units passing with flying colors.

Use them, don't abuse them (at least not too much), maintain them as recommended, and they will serve You well.

And whatever You do, stay safe - even the smallest power generators provide 120V AC and have many moving parts - they are NOT toys!