Trolling motors are commonly used as means of propulsion on kayaks of various sizes, especially on fishing kayaks, intended for longer fishing trips that last for hours and sometimes even for days.

The main issue any kayak owner has is the kayak's load capacity. While electric trolling motors are lightweight and feature excellent weight to thrust ratio, their batteries are anything but light - unless lithium kayak trolling batteries are used.

Before going into more details about the most suitable trolling batteries for kayaks, there are few things about kayaks that must be addressed first:

- load capacity of kayaks vary between 200 and 600 pounds (~90 - 270 kg) rarely more. Smaller kayaks are one-person vessels that can hardly accept one person, paddle, trolling motor and its battery and the rest of the gear. On the other hand, larger fishing kayaks may easily accept one person (or even two) with enough room to spare for the trolling motor and its battery. 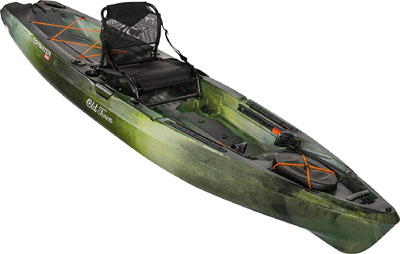 - kayak trolling motors feature shorter shafts, usually in the 24-30 inches (61-76 cm) range, but longer 36-42 inches (91-107 cm) are sometimes used as well - trolling motors with longer shafts may be used, but such long shafts increase the risk of their props hitting bottom rocks, gravel, sand, vegetation, and similar underwater obstacles when being used in shallow waters.

Most kayak trolling motors operate at 12 volts and feature thrust levels in the 24-60 pounds (~11-27 kg) range and require currents of up to ~50 Amps at full throttle.

The following chart lists some of the most popular kayak electric trolling motors with their most important features:

Note: Amazon links ('Model' column) open in the new windows, feel free to check them for the most up-to-date offers and recommendations.

When dimensioning Your kayak trolling motor, keep in mind that trolling motor should never be operated at full throttle most of the time - if that happens, your kayak is underpowered and if something goes wrong (bad weather, strong currents and similar) power safety margin is practically nonexistent!

If You are unsure about the required thrust level for your kayak, check kayak's Owner's manual and/or contact kayak's manufacturer and ask for their recommendations.

Since most trolling kayak motors operate at 12V, the 'only' problem left is to find the required battery capacity.

For small kayak trolling motors (up to 30 pounds of thrust) that will operate at most 10-15 minutes between recharges, even larger kayak fish finder batteries (15-20 Ah) are large enough.

For kayak trolling motors that feature maximum current of 40-50 Amps and require runtime of at least 30-60 minutes, BCI Group 24 deep-cycle batteries are recommended: 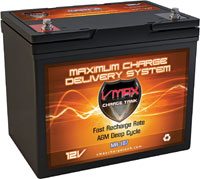 So, for mid-range kayaks, this setup would weigh:

As one can see, the weight quickly adds up.

For situations where even larger capacities are required, 12V 100Ah batteries are recommended. Even larger batteries (for example, BCI Groups 4D and 8D) can offer even longer runtime, but the weight penalty is IMHO too large for kayaks.

Serious users should consider using 12V Lithium Iron Phosphate (LiFePO4) batteries - they initially cost more, but they are much lighter and support a rather large number of charging/discharging cycles. 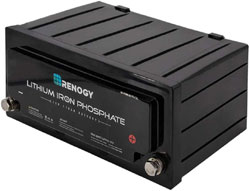 - they can be regularly discharged down to 100% DoD, which should be avoided with lead-acid batteries,

- they can be recharged in 2-3 hours without adverse effects on the battery longevity, etc.

Note: lithium batteries should NOT be connected in series or parallel unless explicitly allowed/recommended by the manufacturer!

The following chart lists some of the most popular 12V lithium deep-cycle batteries, suitable as lightweight, high-capacity kayak trolling batteries: 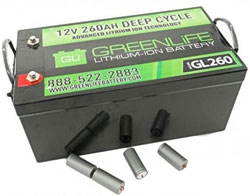 Note: Amazon links ('Model' column) open in the new windows, feel free to check them for the most up-to-date offers and recommendations.

For example, one of the largest batteries is GreenLiFE GL260-260AH (Amazon link, opens in the new window), weighing respectable 80 pounds, but it offers a nominal capacity of 260 Ah, 620 minutes RC (that is more than 10h when being discharged with 25 Amps!) and it can power 50 Amps electric trolling motor for 5 (five!) hours.

When using lithium batteries, weight savings can be significant.

However, due to the initial rather large price, not many people dare to risk their money by trying 150+ Ah lithium batteries as their first lithium trolling battery and smaller batteries may not be suitable in the long run. 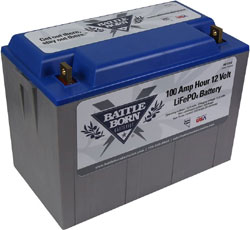 In that case, Battle Born BB10012 (Amazon link, opens in the new window) is a highly recommended lithium battery - it weighs only 31 pounds, and it can freely be connected in parallel and series for creating larger battery packs (200Ah, 300Ah, etc. or 24V, 36V, 48V).

If You, for example, after some time find out that 30 Amps for 3 hours are not long enough, get another Battle Born BB10012 battery and connect them in parallel.

Because of its versatility, Battle Born BB10012 is one of the most popular deep-cycle lithium batteries, commonly used not only for marine, but for all other applications where reliable and lightweight power source is required.

When choosing the battery, always consider your own needs, requirements, and preferences.

And whatever you do, stay safe - don't get stuck away from the coast just for saving few (euro)cents, with fish chum and bait all around and with who knows what swimming under the waves ... been there done that ;)