NOCO Genius Boost 12V UltraSafe Lithium Jump Starters is a group of several jump starters powered by lithium batteries. They are: Sport GB20 400 Amp, Plus GB40 1000 Amp, HD GB70 2000 Amp and Pro GB150 4000 Amp. While smallest Sport GB20 is strong enough to start motors of smaller boats, yachts, cars and similar, largest Pro GB150 4000 Amp is capable of starting even the largest car, truck, boat and yacht motors. Nonetheless, be sure to get jump starter according to your actuall need or perhaps slightly stronger. 'Stronger jump starter' also means 'more expensive', but this is the type of equipment that one should hopefully never use - after first use, you will forget initial costs.

NOCO Genius Boost 12V UltraSafe Lithium Jump Starters can be used for starting internal combustion motors, but also for recharging personal devices (smartphones, tablets, laptops etc), as LED flashlight with several modes of operation etc. Recharging other devices is good thing, but don't discharge your jump starter fully - discharged jump starter is useless for its intended role (when you need it the most!).

Also, they have many built-in safety features for safer operation - and these safety features are there for a very good reason, since these devices produce large currents that can cause serious damage, injuries or worse! So, be very careful when using these devices. Being based on lithium batteries, after being fully charged, they can be stored for months (4-6) and still be able to do their job.

NOCO Genius Boost 12V UltraSafe Lithium Jump Starters differ in size, capacity, maximum current and other important details. Their features and specifications are given in the following table:

Note: all the links in the table are Amazon affiliate links and they open in the new windows, so feel free to check them.

GB20 is the smallest model in this group. It is based on the 24 Wh lithium battery and is capable of providing 400 Amps of current. 3 seconds transferred energy is around 4650 J and when fully charged it is capable of around 20 jump starts. Of course, number of jump starts depend on type and size of the engine and how quickly it starts.

Personally, if you have very small diesel motor (boat, generator and similar), it can be started with this unit too, but only in emergencies. When buying a jump starter, buy it according the engines you have and if you have diesel or diesels, go for one of the larger unit.

GB20 is rather small and lightweight and requires very little space for storing. It comes with 100 lumen LED flashlight, which can be very helpful when jump starting the engine during night.

All NOCO Genius Boost jump starters require battery to be present when jump starting the engine. If it is not present, the jump starter will not work. However, there is a manual override present, but it must be used with utmost caution, since it disables safety features of the unit. All NOCO Genius Boost jump starters are designed for jump starting engines with various lead-acid batteries (AGM, Gel Cel, Wet/Flooded etc.), so if the vehicle/boat/application use some other battery type, it is perhaps better to disconnect the battery. Modern lithium batteries, designed to directly replace lead acid batteries, have protective circuitry and should not cause any issue, however, better safe than sorry. Anyway, check documentation of the battery itself and if doubt, disconnect it.

When using the GB20 or any other similar unit, carefully connect the unit, turn it on and wait some 25-30 seconds and then try to jump start the battery - if the battery is present, jump starter will try to refresh the battery as much as possible. Be sure to let the unit 'rest' for at least 30 seconds after each use - this time is required for unit to cool down. Also, after 5 jump starts, let it rest for several minutes - 15 minutes according to the manual. To be sure about exact jump start procedure, read the manual thoroughly and check the video again.

GB20 jump starter can be used to charge other devices as well, but having jump starter fully charged is perhaps of more importance than having a tablet or similar device recharged. On the other hand, when phone battery is discharged, if required, it can be charged quickly and used for badly needed distress call. If somebody wants to deplete the jump start battery just to be able to see what is happening online or something similar, forget charging it using jump starter! IMHO, of course :) 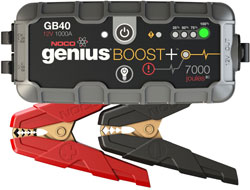 It can be used to jump start gas engines up to 6 liters and diesel engines up to 4 liters in displacement. This is enough for most cars and most smaller fishing and leisure boats.

It has the same battery capacity of 24 Wh, with all other features practically the same, except that it is slightly heavier unit - 2.4 vs 2.1 pounds and have battery clamps designed for larger currents.

NOCO Genius Boost Plus GB40 is very popular jump starter model and is often the first choice of many car owners. It comes at acceptable price and delivers excellent performances for such price. 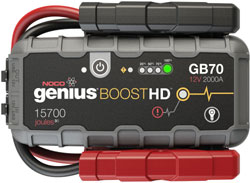 GB70 is much stronger unit than GB20 and GB40. It has much larger lithium battery, which now stores 55 Wh of energy. It is capable of delivering 15700 J of energy in 3 seconds burst, with maximum peak current of 2000 Amps. And that is some serious power and current!

GB70 is designed for gas engines up to 8 liters and diesels up to 6 liters. Due to the larger battery, it can jump start large engines up to 40 times, just be sure to let the unit cool down after each use - again, read the manual. After all, if your engine doesn't start after 3-4 attempts, there is probably something else that is preventing your engine to start, not the faulty battery.

Just like GB20 and GB40 unit, GB70 unit also has 2.1 Amps USB input and output, but it also has XGC input for 12 V, 3 Amp fast charge and XGC 12V 5 Amp output for other appliances like tire compressor or similar.

While GB20 and GB40 units can be charged only via USB input, GB70 can be charged via USB input (rather slow, even when charging using 2 Amps chargers) or via 12V/3A XGC input, which is much faster, since it takes only 2-3 hours to fully charge fully discharged unit.

Note: after charging, let the unit rest and cool down before first use.

GB70 weighs 5 pounds, while GB40 weighs 'only' 2.4 pounds. LED flashlight is 4x stronger than the flashlights in the GB20 and GB40 models and why not, since it has much stronger battery. 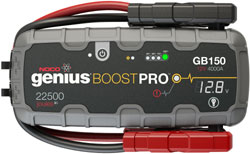 GB150 is the largest unit in this jump starters group. It is based on 88 Wh lithium battery and is capable of providing 22500 J of energy within 3 seconds, with maximum current of 4000 Amps!

This is some serious energy - for example, 100 W light bulb must be turned on for almost 4 minutes in order to 'consume' 22500 J of energy. Or, for those three seconds, GB150 can supply 7.5 kW constantly.

Hence, GB150 is designed for gas and diesel engines of up to, or even more than 10 liters in displacement - cars, trucks, yachts, ships etc.

Also, it is the most expensive unit and the largest one - it weighs 7.5 pounds and it is large enough NOT to fit in the glove compartment of most cars :)

GB150 comes with the strongest LED flashlight (500 lumen vs 400 lumen on GB70 and 100 lumen on GB40 and GB20) and it also come with the built-in voltmeter for checking the battery before jump starting the engine. Since digital voltmeters are so cheap and simple units, IMHO, GB20, GB40 and GB70 units should have one too - hope future models will have them.

Long story short - NOCO Genius Boost Jump Starters will do their job when used as they are supposed to be used. When engine will not start, people get nervous and tend to do things quickly. If that happens to you, take few deep breaths, keep calm and start your engine(s) with these starters as you would normally do. If the engine(s) won't start, your battery is not a problem ...

Note: Amazon link opens in the new window, feel free to check it for the most up-to-date offers and prices.