YTX12-BS is the most common label used for batteries of this size, but its label also differs among the manufacturers. When looking for a new one, pay attention to details, since there are similarly labeled batteries with different dimensions, terminal orientation, specifications, and other important details. 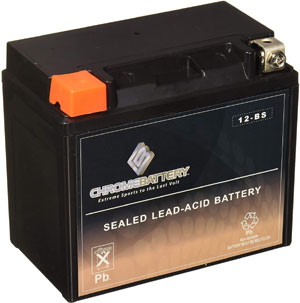 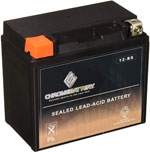 Note: some models come with terminals on both sides, which may be very important for applications where battery wires are too short for '+/-' battery terminals.

Note: Amazon affiliate links open in the new windows, feel free to check them for the most up-to-date offers and prices.

Note: Amazon links ("Model" column) open in the new windows, feel free to check them for the most up-to-date offers and prices.

AGM, Gel-Cell, and lithium YTX12-BS are sealed, spill-proof ('BS' - 'Battery Sealed'), maintenance-free batteries that may operate in any position, except upside-down.

Note: some models may even be position upside-down, but these models are mostly lithium YTX12 batteries. 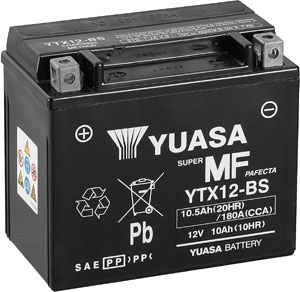 These lead-acid batteries are kept charged with vehicle onboard chargers - alternator powered by an internal combustion engine.

Lithium YTX12 batteries feature Battery Management System (BMS) that monitors and protects the lithium battery, allowing it to be charged with a 'common' charging system found on most motorcycles, vehicles, and similar.

Note: when the AGM battery charger enters desulphation mode, it practically sends spikes of energy into the battery in order to reduce the amount of lead-sulfate. These spikes may damage lithium batteries.

Lithium YTX12 batteries are not as common as AGM/Gel batteries, but they are gaining in popularity. These batteries are much lighter (2-3x) than lead-acid batteries while offering the same or even better performances.

The following cross reference chart lists some of the most popular lithium YTX12 battery models:

Note: Amazon affiliate links ('Model' column) opens in the new window, feel free to check them for the most up-to-date offers and prices.

- 'Restart Technology': Battery Management System (BMS) monitors battery charge and if the voltage drops below a certain level due to some parasite load, BMS shuts off the battery. In order to start the engine, the user has to 'restart' the battery - although not fully charged, batteries with the Restart option have more than enough charge to successfully crank the engine.

- 'Battery Display': if present, the battery display provides the user with the most important information about the battery, like voltage and remaining charge.

Of course, there are other details that differ between lead-acid and lithium batteries, but these are perhaps the most important.

The prices of the most popular AGM YTX12-BS batteries are being shown in the following list:

As one can see, lithium YTX12 batteries cost more than AGM YTX12 batteries, but they are 2-3x lighter, they often can provide more current (2-2.5x), have a very low self-discharge rate, etc.

If you for some reason regularly charge your lithium YTX12 or similar battery outside of the vehicle, having a dedicated 1-2 Amps 12 volts lithium-ion battery charger is highly recommended - they are cheap, safe and they do their job well. 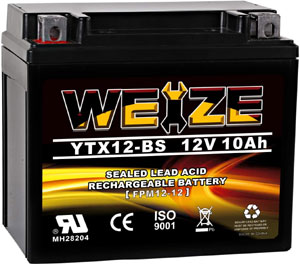 While lithium LiFePO4 batteries are initially more expensive, they are lighter, usually are able to provide more Amps, and they last longer if not mistreated. Also, some models, although declared as being YTX12 batteries are actually smaller, allowing the user to pack even some more of the required/desired equipment onboard the vehicle.

Self-discharge rate at lower temperatures of AGM YTX12-BS batteries allow the user to store them for 3-4 months without charge dropping below 80% SoC.

The self-discharge rate of lithium YTX12 batteries often allows the user to store them for up to a year, without adverse effects on the performances.

Which one to choose, AGM or Lithium YTX12 battery? Unless you are a pro-rider, or unless you have a very important reason that requires you to shed off few pounds of weight from your vehicle, go for a good and reliable AGM YTX12-BS battery and don't look any further ...