Of course, such battery is anything but lightweight and cheap, but ...

The battery is a sealed AGM VRLA battery and can be operated in practically any position, except upside-down.

But, it is a maintenance-free, spill-proof battery, which is a great improvement over wet/flooded lead-acid batteries.

On top of the battery, there is a pair of carrying handles, allowing the two adults to carry the battery to the shorter distances - we emphasize the "two adults"!

Odyssey PC2250 (ODS-AGM6M) battery comes with a pair of stud and SAE battery terminals, allowing the users to easily connect the battery, regardless of the application.

But, the battery also tolerates up to 400 charging/discharging cycles down to 80% DoD, with the capacity loss down to 80% of the nominal capacity (20h, 126Ah).

When the DoD% is decreased, the number of supported charging/discharging cycles is increased:

Note: when the battery arrives, it comes with a very detailed Owner's Manual, so feel free to read it thoroughly before using the battery. Better safe than sorry.

As such, it is used in the most demanding automotive, marine and industrial applications.

As one can see, like all other AGM batteries, Odyssey PC2250 (ODS-AGM6M) battery also features capacity loss with the increase of discharge current/power, but that capacity loss is better than most similar AGM battery - 1h capacity is ~63.65% of its nominal 20h capacity, while most AGM batteries are in the 55-60% range.

Combined with the fact that the battery tolerates very low discharges, Odyssey PC2250 (ODS-AGM6M) battery can be left in storage even longer than 2 years at lower temperatures - as soon as its voltage reaches 12.6 volts, it should be fully recharged.

Personally, if You are going to store the Odyssey PC2250 (ODS-AGM6M) battery for a longer period of time, fully charge it and store it in a cool area connected to the quality battery maintainer - it is not a cheap battery, so taking care of it is highly recommended.

However, if the battery is charged in the workshop or similar, using a battery charger, there are a few things to consider.

For example, when the battery is discharged down to 100% DoD, it can be quickly recharged:

Note: During such charging, it is also highly recommended to monitor the battery's temperature. Again, for more details of such charging, please check the Owner's Manual.

Personally, in order to prolong the battery's lifetime, it is recommended to charge the battery with an advanced AGM battery with the maximum charging current in the 15-25 Amps range and a temperature probe to compensate the charging voltage according to the local/battery temperature. 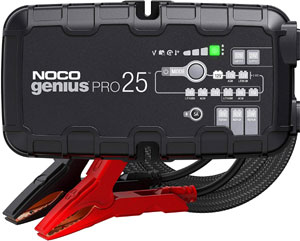 One of the recommended models is NOCO Genius PRO25 Advanced Battery Charger (Amazon link, opens in the new window) - this is a multifunction intelligent battery charger, intended to charge 6V (25A), 12V (25A), and 24V (12.5A), flooded, Gel-cell, AGM and Lithium batteries.

Also, it can be used to recover deeply discharged batteries and can detect battery sulfation and acid stratification, etc. It is not a cheap battery charger, but neither are the batteries charged by this unit.

Of course, there are other suitable chargers on the market.

Advanced AGM battery chargers with lower maximum charging current can also be used, but that will prolong the battery charging time.

However, it is recommended to charge the battery with at least 10 Amps battery chargers. 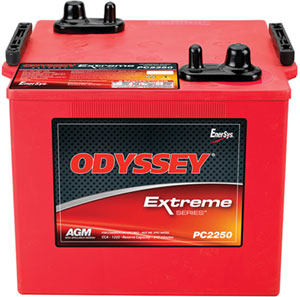 Long Story Short: With its estimated float life of 8-12 years and service life of 3-10 years, Odyssey PC2250 (ODS-AGM6M) battery is a common choice for BCI 6T battery applications - these batteries are somewhere between BCI Group 31 Batteries and BCI Group 4D, 6D and 8D Batteries in terms of size and performances.